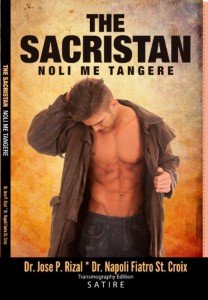 ★★★★  The Sacristan: Noli Me Tángere is a revisitation and a reimagining of the seminal Filipino manifesto Noli Me Tángere by José Rival, which describes the numerous horrors inflicted upon the people of the Philippines by Spanish colonists. Specifically, this short novel illuminates the passage in Rival’s original text where a pair of brothers is forced to assume work at a corrupt Catholic church, where they are physically, sexually, and emotionally abused by their overseers. The younger brother, Crispin, is accused of theft and punished for his “crime” by being thrown from the belfry. His older brother, Basilio is no better off, as he is continually molested by priests and friars, before being murdered himself. When the boys’ mother discovers what befell them, she is driven made by her grief.Dr. Napoli Fiatro St. Croix is clearly a scholar of Filipino history. The passion and perspicacity with which events are described here shows that he has spent a great deal of time poring over Rival’s original novel. By choosing to focus on one of the most horrific passages from Noli Me Tángere, St. Croix is able to isolate the story of two young boys, stricken by poverty, and thereby show the power imbalance that plagued the people of the Philippines during the reign of Spanish Colonialism. The graphic nature of these events is further enhanced by St. Croix’s illustrations throughout the text, which paint the boys with blood in an almost garish fashion. There is a religious nature to these images that is beautiful and, at the same time, tragic. The Sacristan: Noli Me Tángere is a unique and much-needed entry in Filipino scholarship that shines a light on a dark period during the country’s history.

To purchase a copy of The Sacristan: Noli Me Tángere by Dr. Napoli Fiatro St. Croix, click here to find it on Amazon.